Improving the Profitability of N Use in Corn

The 2015 season was the first season of this two-year project. The objective of this project is to determine if fertilizer type (ESN, urea, wet distillers grain, Super U and UAN as a split) impacts fertilizer N efficiency. Treatments consisted of a factorial combination of the fertilizer types and three rates of N (75, 100 and 125% optimum fertilizer rate). All treatments were applied at planting except for the UAN split which was applied at the 6 leaf stage. The UAN was dribbled between the rows of corn, while all other treatments were hand broadcast and incorporated at planting. The experiment was conducted at three locations (Casselton, Carrington and near Hope in Steele County). Data were obtained from all locations. However, the variability was quite high at Casselton and Hope due to excessive rainfall early in the season. There were no significant differences between treatments at the Carrington location, probably due to the relatively high fertility level there and the dry conditions during part of the growing season. The following general observations can be made, however. Treatments with WDGs were as or more productive than other sources of N at the 100% and 125% rates and when mixed with urea. Splitting the N was beneficial in one of the locations and had a negative impact at two of the locations (probably due to the N being stranded as there was inadequate moisture after application). This research will be repeated in the 2016 growing season with the inclusion of some fall application treatments. Experiments have already been established and fall treatments applied in three locations (Casselton, Carrington and Steele County). A graduate student has joined the project and will be trained during the remaining period of the project. 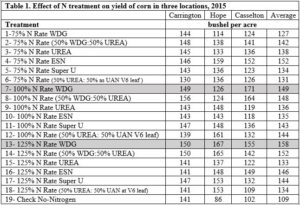